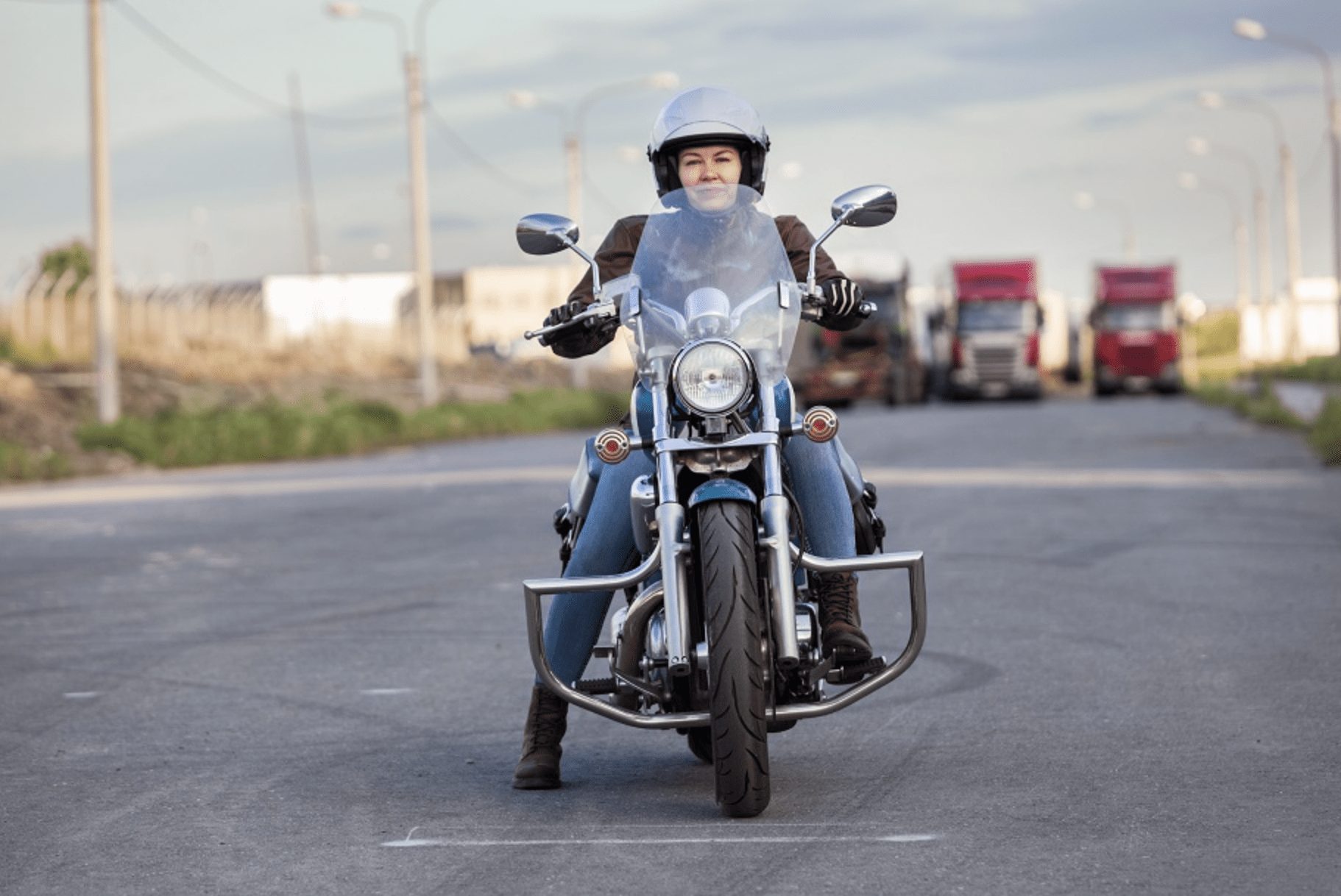 In 2019, over 5,000 motorcyclists died in crashes comprising 14% of all motor vehicle crash deaths. You’re vulnerable on a motorcycle, but there are some things you can do to reduce your chances of becoming a statistic.

If you’re a motorcycle rider or thinking about learning to ride, motorcycle safety school is a potential lifesaver.

Keep reading for information about things you’ll learn during a motorcycle safety class.

Many people jump on a motorcycle and feel right at home. That feeling of ease may lull you into not learning everything there is to know about your bike.

In a motorcycle safety course, you’ll study all the small details about the motorcycle. You’ll learn how all the controls function, where to find them, and what they do. You’ll also learn about tire pressure, tread depth, and more.

You’ll learn about the rules and laws of the road when it comes to motorcycles.

As a motorcyclist, you’re at a disadvantage on the road. You’re not as visible and more likely to suffer injury or death in a crash.

When a car and motorcycle collide, the police often assign blame to the motorcyclist more readily than the car driver. If this happens to you, get some help.

You’ll run through numerous safety exercises ensuring your competence on a motorcycle. These exercises include practice navigating around objects, shifting gears, accelerating, and braking.

You’ll learn a lot of additional safety information that can definitely save your life. Hands down, the most important thing you can do when riding a motorcycle is to wear a helmet.

If you have a passenger, she should wear a helmet too. Helmets reduce your risk of a head injury by almost 70% and reduce the risk of death by almost 40%.

Motorcycle safety school teaches you how you can be more conspicuous, like wearing a white helmet instead of a black one. Many times when car drivers are at fault, they say they didn’t see the motorcycle.

You’ll learn about increasing rider awareness and strategies for coping with potential bad situations. A motorcyclist should always be more alert and aware in an intersection. For instance, you should never assume a car driver making a left across traffic sees you.

Attitude is another important factor when it comes to motorcycle safety. Are you driving fast, failing to use a blinker, and breaking laws? You’re more likely to have an accident.

Your instructor will go into detail on these topics.

Was this article helpful? Keep perusing the site for more!

Federalism is a form of government that allows more than one central entity to take power. This means that there is a federal government that is superior to others and smaller, more local governments that control local and regional affairs.  The idea is to be able to better meet the needs of every region of the country, but some issues do arise.

The Advantages of Federalism

Even if a person or group has taken control of all three branches of the federal government, federalism ensures that state governments will still function independently. Therefore, federalism meets the vision of a framework of government that ensures independence.

In running the size of the United States with such a diverse population, it is very easy to do if local officials are given power. Similarly, state and local officials are closer to the problems in their areas, so it makes sense for them to choose policies to address these issues.

Many Americans feel close to their home state, and maintain that relationship by giving power to federal states.

The Disadvantages of Federalism

The biggest problem that arises when your government has the power of two institutions is the power struggle. Both the central and state governments want to assert their power over each other, which sometimes leads to conflicts between them. Even long-term conflicts between the central and state governments can create obstacles to national development and prosperity.

The federal form of government allows for regional inequality between different states. For example, instead of uniformly financing education across the country, since this is a state issue, some states will spend more on education than other states, which may be considered is different. The same is true of taxes, health care programs, and welfare programs, which promote regional inequality between different states.

Therefore, the form of our federal government has numerous advantages, such as protecting us from oppression, dispersing power, increasing the effectiveness of citizens, and protecting slavery and secession from disadvantages, increasing inequality between states, stopping national policies, and how they treat their citizens. What are the advantages over the disadvantages?  I think so.  I support the federal system, agree on the advantages, and do my best to counteract the disadvantages.  Ultimately, I think our system is even better than the parliamentary and cabinet systems found in the UK, as well as the confederation system found in Canada, and the system before our current system.

Read Here : Advantages and Disadvantages of Federal vs State Court

Advantages and Disadvantages of Federal vs State Court 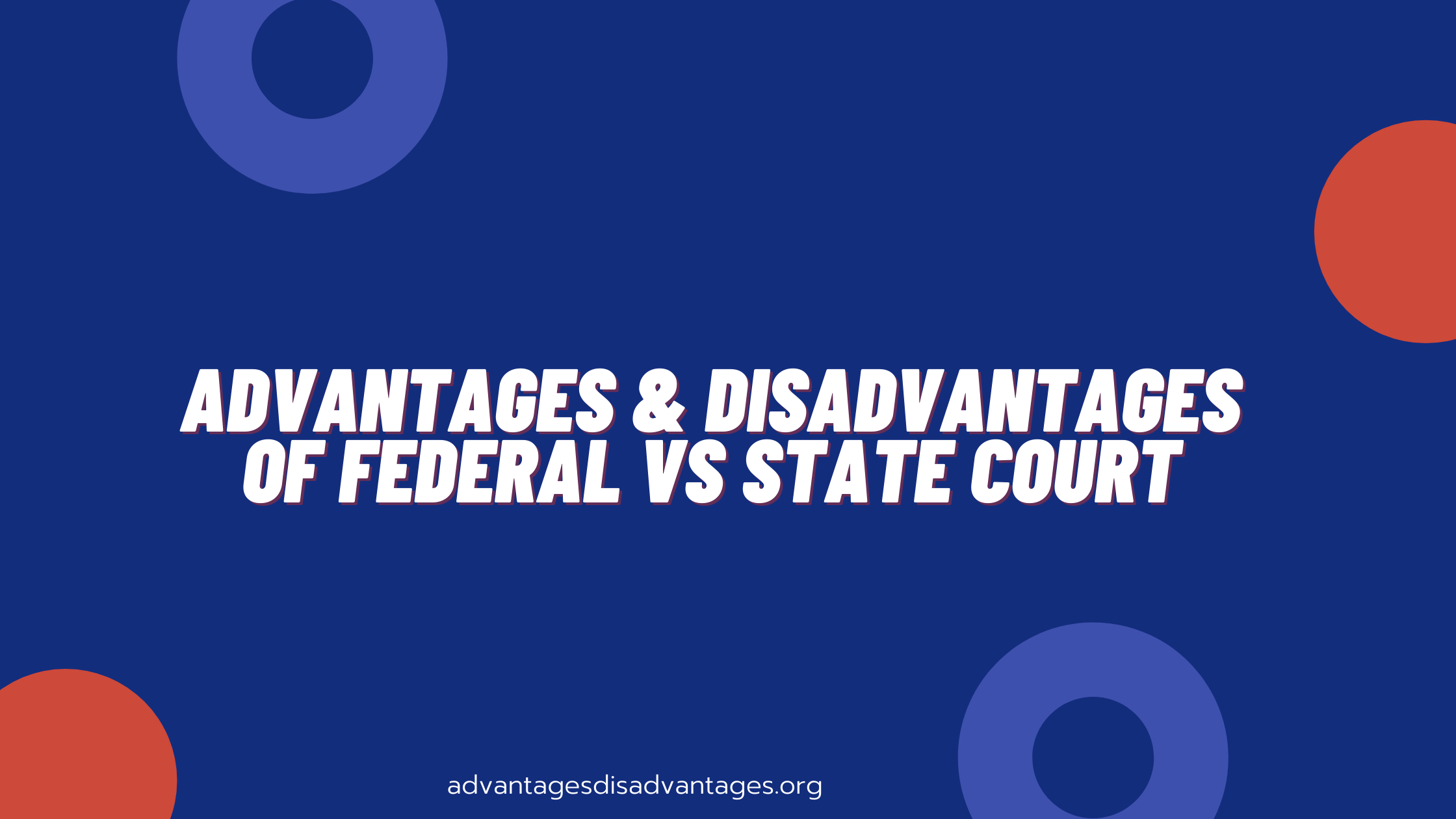 The court system has two large bodies Federal and state courts. Jurisdiction is the legal definition that determines which court can hear a case.

In certain cases, both the state and the federal courts may have authority over the matter. For example, cases involving parties in two separate States refers to as diversity jurisdictions, may qualify to be brought before either federal or state courts. If both options are open, the plaintiff can choose how to file the complaint.

Advantages and Disadvantages of Federal vs State Court

Advantage of federal versus state court:

Here are some advantages of federal versus state courts for file cases in these courts.

State courts deal with a much greater amount of instances and have more interaction with the public than federal courts do. While the federal courts hear much fewer cases than the state courts, the cases they hear appear more frequently to be of national significance. So we would say that the federal court takes less time to give a decision.

The process of cases solution is more systematic, usually quicker than the state court.

The electronic filling in some federal courts saves cost.

The state courts are governed by the laws of every other State and have wide jurisdiction. Federal courts, on the other hand, are organized by the Constitution and have a much-limited jurisdiction.

Federal courts appear to be the less forgiving of disruptions on either side, and persistence is not what the plaintiffs seek.

It is no wonder that businesses suing as claimants usually tend to appeal to the federal court, not the state court. Federal courts are assumed to be more stable, more open, and less susceptible to local prejudice than national courts. The benefit of federal over state courts is that state courts are mostly state legislators and will make decisions based on self-preservation, and federal judges are selected for life and not affected by job stability; another benefit would be that judgments by the higher court, such as the federal court of appeal, would be conclusive.

The disadvantage of federal versus state court:

It is reported that federal court is expensive than state court. There are a lot of works to discover verdict so the client bears more expense than in state court. In the case of State courts, the discovery process usually does not take place until the parties have made their allegations. On the other hand, the exploration process starts before this decision is done.

In federal court cases become complex in some conditions. The Federal Court and its procedures prove to be more complicated than the state court. It may or may not be possible to amend the complaint to defeat diversity authority. Without an interview, an in-depth review is unlikely.

Some lawsuits will be resolved after the investigation is finished, others will give a comprehensive trial. Due to procedural discrepancies that result in a more in-depth nature of the legal problems, trials that are tired in the federal court usually take longer than those pursued in the state system.

The period in each case would be different. State courts can monitor cases in less time but federal courts consider to better than state court in this regard. This may minimize the time required to settle a lawsuit, which may also help reduce the total cost.

federal Courts have authority over personal injury cases only if there is a “diversity” between the parties. Variety is all about the state in which each community lives. Diversity of jurisdiction occurs if all plaintiffs are from separate states than all victims and the number in dispute. If a faction on the opposite side is of the same state, diversity would be lost.

In certain cases, both the state and the federal courts may have authority over the matter. For example, cases involving parties in two separate States, alluded to as diverse jurisdictions, may qualify to be brought before either federal or state courts. If both choices are open, the plaintiff may choose where to file the complaint. In such cases, it is prudent to provide a solid grasp of the advantages and disadvantages of federal versus state courts before the choice of jurisdiction. The disparities in costs and pace are two areas to be considered.